Posted on 17 February 2019 by slantedhall

The 20th anniversary TypeCon (@typecon / @typesociety) was held in Portland, Oregon, USA, 1–5 August 2018 at the Hilton Portland Downtown. I had to miss parts of Saturday and Sunday, including most of the evening socials, due to Crohn’s related issues. The past few months have been hectic, so the write-up is bit less detailed. I just uploaded photos of the conference and will try to add notes in due time.

Unexpectedly, I sang in a barbershop chorus rehearsal. After a long, all-day drive, I arrived at a friend’s place just south of Portland on Tuesday evening, just in time to head up to Portland with him before his Bridge Town Sound men’s barbershop chorus rehearsal. I wanted to hear a bit of the rehearsal before heading back to the hotel to rest. They plopped a binder in front of me. But, I was just planning to sit and listen for bit, I responded. It had been a good 25 years since I sang regularly, so my vocal cords were out of shape. I decided to join for just a little while, but ended up staying for the entire rehearsal. When I sang in a mixed choir or solo, my role was baritone/bass. John sings baritone, but in a men’s barbershop chorus, the baritone part is like the alto harmony of a mixed chorus. I wanted to hear John sing, again, so I went further out of my comfort zone and sang in his section. I can mimic, quickly, and read music, so it worked out well though I had never sung barbershop. And was quite fun to just jump in. If I lived in Portland, I suspect I’d consider auditioning to join them. A good group of folk.

On Wednesday, I caught up with Georg Seifert (@schriftgestalt) & Rainer Scheichelbauer (@mekkablue) of Glyphs (@glyphsapp) for lunch at HOTLIPS Pizza (@HOTLIPSpizza)—good pizza—near the Pacific Northwest College of Art (@PNCA), where the workshops were being held.

Then, I sat in to help out with their workshop Create a Variable Font Animation in Glyphs. If you have any interest in variable fonts, consider watching his Sunday talk Yes, but can Variable Fonts do this? [video]

I would have loved to have attended the Thursday workshops, such as Meir Sadan’s (@meirsadan) workshop on Hebrew Writing (check out his Hebrew Type Club for useful resources and workshops) and Aaron Bell’s (@aaronbell) workshop ㄱ to ㅎ: An Intro to Hangul Design, but I was already booked to attend the Type & Design Education Forum.

Before lunch, Lauren Meranda (@LAMeranda), a professor at Judson University, talked about Coaxing a Thesis Topic with an “aim to empower them to create culture, not just mimic it.”

Yvonne Cao of TCU (@TCU) showed her work in helping students understand the issues and thinking that goes into branding across cultures in West Meets East: Exploration in Cross-cultural Branding. 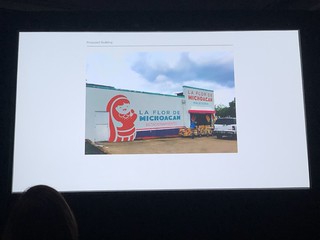 Jan Ballard (@ProfessorJan) of TCU (@TCU) show projects in Rebanding Small Businesses in the Face of Community Gentrification that created new branding that respected the duality of cultures each represented and also helped the students become more “active members of their surrounding community.”

Annabelle Gould of UW Seattle showed work and projects from her class Combining Type + Image / Interpreting Constitutional Amendments, asking students to design a poster interpreting one of the U.S. Consitutional Amendments to “remind people of its original purpose and importance, raise awareness about a particular issue related to the amendment, or call for a change to the amendment itself.” Intended audience was fellow students on campus. 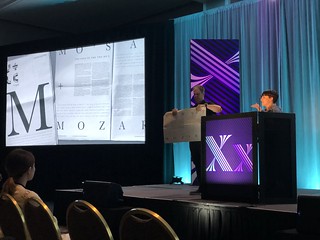 In From Characters to Page Systems in Upper & lower case, Michael Stinson of TypeEd (@TypeEd) & Emily Atwood (@_therealemily) tasked their students to redesign a U&lc magazine article in a way “that reflects their generation.” Scans of the old U&lc issues.

Meaghan Dee (@meagdee) talked about The Role of Hand-Lettering in a Contemporary Design Curriculum that is ”pivoting toward interaction and web design” in the Visual Communication Design department at Virginia Tech.

Australian lettering artist and illustrator Gemma O’Brien (@mrseaves) talked about her history and experience, walked us through some of her portfolio and demonstrated live some of the techniques she uses. Fun and interesting.

I was able to drop by the Future Fonts (@futurefonts) and Graphc Means afterparty at Outlet. Good to see some friends and good work of Portland’s creative community. In addition to an old working Apple Macintosh, the had my friends’ Evil Mad Scientist Laboratories (@EMSL) AxiDraw V3 pen plotter set up and being used at the party. 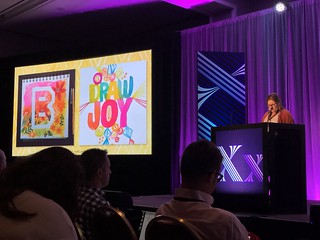 Lila Symons opened the main program with #FontsMadeByWomen: A Look Into the Typefaces Created and Developed by Women at Hallmark, showcasing some of the wonderful women designers throughout the history of Hallmark and sharing how collaborations with the other female artists and makers “have inspired her own lettering and font work both as a developer and lettering source.” Nice to see the great work done by those illustrators, designers, and lettering artists.

Gloria Kondrup of the Hoffmitz Milken Center for Typography (@hmctartcenter) showed work on the exhibition FEMINAE: Typographic Voices of Women, by Women of political posters over the past 50 years from the Center for the Study of Political Graphics archives. “Artists include Barbara Kruger, Sister Corita Kent, the Guerilla Girls, and others from the US, Mexico, Europe and Australia.”

In Neon: Letters from the Night Sky, Randall Ann Homan and Al Barca (@sfneonbook) took us on a tour of neon sign survivors in the western United States. They documented San Francisco’s 200+ legacy neon signs in San Francisco Neon: Survivors and Lost Icons (2014) and give neon tours in SF.

Keynote: Louise Fili (@louisefili) showed some of her extensive design work and process. Lots of nice detail in her designs. I especially like how she shapes the colophon and copyright pages, in a way appropriate to the book. Check the some example copyright pages on her site.

Bill Moran & Jim Moran of the Hamilton Wood Type & Printing Museum (@hamiltonwoodtyp) show some of the amazing detail work done in space typically smaller than 1 inch square in Renaissance Wood Type & The Grammar of Ornament. As part of their mission to preserve the art of letterpress, they are also “cutting new wood type from these historical models.”

Amy Redmond (@amadapress) shared her adventure in identifying the source of type and “the techniques she used to unearth the true identities of its family members” while reviewing inventory of Stern & Faye Printers metal house face, Futura, in Hello My Name Is… Most Likely Not Futura (A Letterpress Adventure in Metal Type Identification).

In Typographic + Printing Renegades, Nancy Bernardo (@dec_debris) talked about “the role of the early 20th century printer as designer, punchcutters such as Herman Ihlenberg, and how these early renegades have influenced the type and design landscape of today.”

Aaron Bell (@sajatype, @aaronbell), Jess McCarty (@sectiontype, @magpiepaper), & Erin McLaughlin (@hindirinny, @fontwala) shared experiences about their fun project Titles in Translation [video], in which they “embarked on a weekly challenge to translate iconic film title designs from around the globe.”

Craig Welsh explored Industrial Chimney Lettering, incuding reviewing the historical aspects of how they were made, using archival engineering drawings, and “how a digital version of industrial chimney lettering has been optically adjusted to consider the proportions of the ‘face’ (outer surface) of the bricks and mortar thickness (joints between bricks).” The digital design work for the resultant Stack typeface was done by James Hultquist-Todd (@jtdtype). 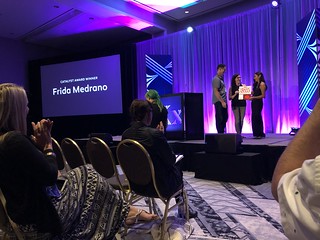 The 2018 SOTA Catalyst Award was presented to Frida Medrano (@fridaemg) of Nuevo León, México. Read about her good work on the awards page.

Jessica Hische (@jessicahische) gave a special presentation to premiere the animated trailer for her children’s book, Tomorrow I’ll Be Brave.

Paul D. Hunt (@pauldhunt) talked about the history and “evolution of writing, from hieroglyphics to our modern text+emoji hybrid system” in Language, Culture, Emoji.

Jean François Porchez (@typofonderie) talked about his experience and work in designing custom typefaces for recognizable brands in The Visible Invisibility of Words. 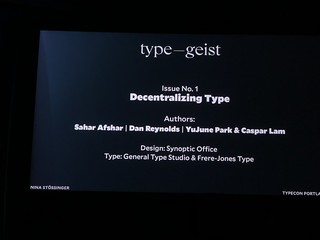 In Heavy Metal Type, Sergio Trujillo explored the type in heavy metal album designs, along with its influence of 1960s era psychedlic album covers. I should remember to share some of the metal and hardcore bands I knew in Boston in the 1990s. Some used my photos on their albums and tour posters.

In Hoitech [video], Sami Kortemäki and Akiem Helmling of Underware (@underware) explored design space thoughts in variable fonts. “So what is a design space actually really about? And what if there is no space at all?”

Lynne Yun (@lynneyun) shared the research and practice she did in Reviving a Calligraphy Hand after running across a gothic cursive from the 1600s.

In Writing Systems of the World: What the ▯▯▯▯ is going on?, Zachary Scheuren (@zacharyscheuren) presented “an overview of world scripts and the common problems that keep some scripts from being used. We will then look at what needs to be done to remedy this and how everyone can help.” I have some similar motivation for working with communities whose writing systems have little to no support with fonts and technology, developing new fonts, tools, education, and resources while advocating future design within the communities.

Matthew Wine (@lettersandliquor) showed the results of his exploration into cocktail ephemera in Letters and Liquor: a Typographic History of Cocktails.

Jess McCarty (@magpiepaper) talked about how good customer service can help set one apart and build a brand in Stop Being an Internet A**hole: Radical Ideas for Winning Customers and Making Money in a Crowded Marketplace [transcript/slides]. She put together a useful set of resources. 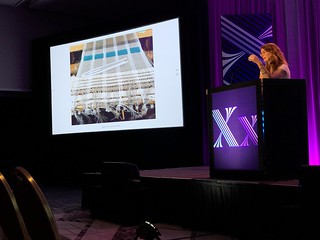 Aoife Mooney (@aoifemooney) shared her experience learning to weave and how that process inspired a typeface in Textura: The Woven Word (or typographic texture: woven language).

Rainer Erich Scheichelbauer (@mekkablue) of Glyphs (@glyphsapp) and Schriftlabor (@schriftlabor) presented live coding of variable fonts and OpenType Variations in Yes, but can Variable Fonts do this? [video] He started with showing the Eadweard Muybridge Sallie Gardner at a Gallop, aka Horse in Motion, (1878) series of photographs as a variable font. 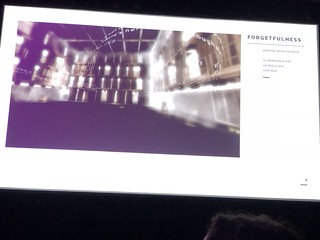 Meaghan Dee (@meagdee) explored the use of Typography for Immersive, Mixed, and Virtual Environments. She showed Shakespeare’s Garden: An Immersive Sound Stroll Through His Sonnets, Soliloquies, and Scenes, futureHAUS, and “a virtual reality piece on the poem Forgetfulness, by Denise Duhamel.”

Radek Sidun (@radeksidun) showed some of the fun results of students from the semester research project on variable fonts at the UMPRUM Academy (@UMPRUMKA) Type Design and Typography studio in Prague, Czech Republic.

Keynote: Lauren Hom (@homtweethom) started off her story with asking what would happen if you asked for what you wanted? and proposing that passion projects never stop working for you. 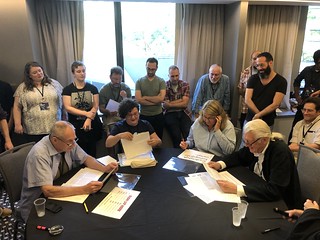 One of my favorite aspects of TypeCon is the Type Crit. A type designer gets 10 minutes of quick critique with three master type designers: Matthew Carter, John Downer, & Jill Pichotta (@jillpichotta).

This year’s crop of critique signups included new fonts in progress by:

Other Posts about TypeCon

When I have a little more time, I may add more links to other posts about TypeCon 2018 here. Let me know of any that I missed.

Here are some other posts about TypeCon 2018:

Please let me know if any corrections are needed. I look forward to seeing folk at future type gatherings. I do try to attend TypeThursday (@TypeThursdaySF) at the San Francisco Center for the Book (@sfcb), at least.  Come talk with me about typeface design (+ music notation fonts) and tools development!